There has been a mistake in the account audits that I have not noticed before. The new Google Ads support guidelines emphasize adding a dynamic ad group to standard text (keyword-targeted) campaigns. There are at least two reasons why this solution is wrong.

Why does Google Ads support insist on implementing a dynamic ad group?

Support Google Ads are not specialists as some people think. Consultants have goals set in advance to achieve, and in fact, few of these people know whether the changes they propose or set are good or bad. In this case, it is the wrong solution. Why?

Why not add a dynamic ad group to a standard text campaign?

When describing the disadvantages of this solution, I would like to emphasize that the dynamic search campaign itself is not a bad idea. It is practised in many cases on Google Ads accounts with satisfying results. The problem I am discussing concerns mixing this type of campaign with a standard search campaign.

This objection relates to accounts and campaigns created by Google assistants. Dynamic Search Ads take a lot of work to start with in terms of keyword optimization. During the first days, weeks and months (it all depends on the campaign budget), you should frequently go through the “Search terms” tab and exclude unwanted keywords. Dynamic ads match the keywords on our website to the searched term by the user. Therefore, there may be a situation (and it will undoubtedly happen) in which text ads show up for keywords that are not right for us and the budget is burned out. Unfortunately, campaign assistants do not mention it. Many people who have not decided to run the campaign by a specialist do not even know about the possibility of excluding keywords and that their ads appear with incorrect keywords.

Below there is an example of search terms for which advertisements appeared for a company that produces only wooden windows and doors in the UK. Pay attention to how huge the cost of clicking on these missed keywords was and how much budget could have been burned if the campaign had lasted longer. 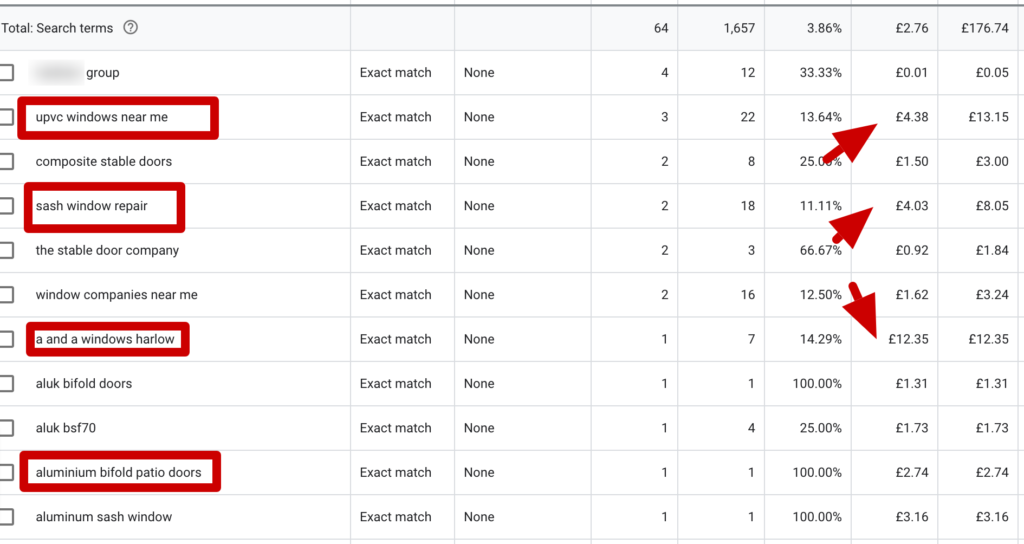 “Block” other ad groups in the campaign

Text campaigns in Google Ads with several ad groups, especially those limited by budget, tend to miss or limit the impressions of ad groups that contain less frequently searched keywords. And that is, in my opinion, the biggest downside a dynamic ad group brings to a standard text campaign.

Dynamic ad groups are not limited by the keywords we choose, but they match the text on the page, so they usually have a lot of impressions, and thus – clicks. More than the other ad groups because they also use phrases from the so-called “long tail”. After some time, the most significant proportion of a campaign’s daily budget is allocated to that one ad group, and the rest of the ad groups stop showing due to a lack of funding.

There would be nothing wrong with that if not the other ad groups are the keywords most important to our campaign and the ones that best sell our products or services. Additionally, these restricted ad groups have ads that we’ve matched to your keywords, and we have control over how the headline is displayed.

How to solve it?

I don’t like leaving problems unresolved, so it’s time for some solutions. Hopefully, the two disadvantages described above have convinced you that the idea of ​​mixing these two types of campaigns is lame.

Creating a separate Dynamic Search campaign with relevant dynamic goals (pages/categories) would be much better. Such a campaign will “catch” us long-tail keywords, which we can later use to develop our standard text campaign. For this, it will have a separate budget, so the second described minus will not apply.

As you can see, the campaign settings proposed by assistants are not always a good solution. You need to think carefully about the changes you make from many angles and think about their impact on the campaign. Unfortunately, with new accounts created by assistants, it will be difficult to verify these problems due to people’s lack of knowledge using Google Ads services. And here, I do not blame the owners of companies or e-commerce that they do not have such knowledge. We are not able to know everything. Google Ads account assistants should inform new customers how to optimize their campaigns and not leave them with an unoptimized campaign simply performing poorly.

If you need help with your Google Ads campaign, don’t hesitate to get in touch with me via the form. We will indeed find a solution to the problems.

These articles may interest you